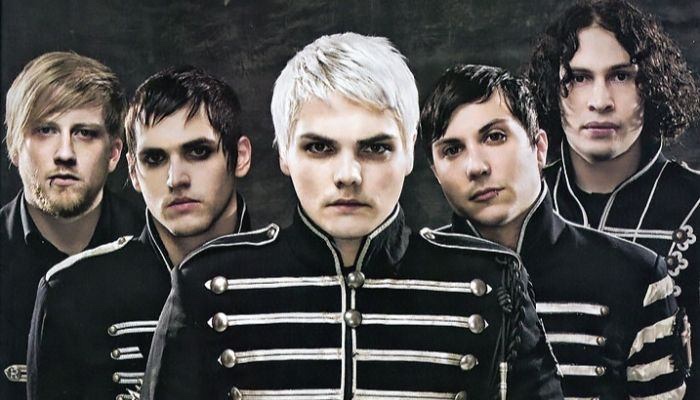 Alright it’s time to get in our feels, my dudes. This week, it is time to venture into the world of emo. For the first edition of Saturday Nostalgia, I wanted to write about a group that gives me major amounts of nostalgia every time I hear them, My Chemical Romance. Do you have that one artist that you literally can not turn off no matter the circumstance? Yeah, that’s My Chemical Romance for me. MCR is probably the first music act I really fell in love with besides maybe Nirvana. I mean, I have been listening to them consistently since I first heard them back in 2002. I was 8 years old when I started listening to MCR, and I have been a religious fan ever since;  I really wish they did not break up in 2013. MCR were the leaders of the emo music scene they didn’t even want to be a part of. Although lead singer Gerard Way has stated he hates the term “emo” and most of the music affiliated with its original sound, they are one of the genre’s most recognizable groups, at least in the eyes of the fans. It doesn’t even matter what how you characterize MCR; the reason they were so popular is because their sound was bigger than anything else in pop and alternative rock at the time. From their incredibly electric stage performances to their use of complicated concepts when creating their music to their polarizing look and outfits, My Chemical Romance was larger than life and epic in the best way. They were able to capture the essence of the overall feeling of what it felt to me a youth during this time period. The world changed and advanced very quickly when I was young because of the technology boom, and the invention of social media and sensationalized media coverage of current events made it a stressful and worrisome time, which resulted  in intensity for a generation of helicopter parents. MCR made us feel not alone or ostracized for being sad or confused. In a time period where the understanding between youth and adults seemed as far apart as it has ever been, bands like My Chemical Romance gave us a community to be a part of. The only bad thing about MCR to me is the fact they aren’t making music or touring anymore.

Everything about who MCR was seemed different and unique, and the way the band was started is no different. The idea to make the band came to Gerard Way while he was going to art school in New York.  He had always wanted to be in a band, but was so introverted and withdrawn he never got the opportunity. His attitude changed on one of the most important days in modern history, when the World Trade Center was attacked on 9/11/2001. Way had been interning in New York City at the time, and watched the horrific event happen from his office window. This inspired him to do something bigger and more important with his life, and ultimately led to him trying to start a band. He recruited his brother Mikey to play bass, added Matt Pelissier to play drums, and got friend Ray Toro to play guitar(which was a phenomenal idea because dude can shred). In early 2002, they released their first record, “I Brought You My Bullets, You Brought Me Your Love.” Following this, they started playing any clubs and bars in the Jersey area they could, and gained a pretty devout underground following. This lead to them signing with Reprise Records. In 2004, they released the critically acclaimed best selling album “Three Cheers for Sweet Revenge,” which propelled them into superstardom, and the rest is obviously history.

My Chemical Romance has always been polarizing, and did not fit the mold of any specific genre. The lyrical content and the way they dressed definitely could be characterized as emo, but their actual music, at least in my opinion and the opinion of Gerard Way, is not necessarily emo. In fact, they hated being characterized as emo, and I can understand why even though I like emo music, because most music which is considered to be in this genre is pretty monotonous and almost always follows a specific pop punk formula. But MCR does not fit that mold in any way. When asked who their inspirations were, they have said they were just as influenced by Queen as they were by the Smashing Pumpkins as they were by the Misfits as they were by Black Flag; in other words, their influences do not boil down to a particular sound or theme. I mean just on “The Black Parade,” there is “Cancer,” which is a piano rock ballad, “Mama,” which would probably be considered hard folk rock, there is “Teenagers,” which sounds like a mid 80’s punk track, and so on and so forth. The point is that it is really difficult to boil them down to a particular genre. Because of this, they transcended the emo scene into superstardom, ironically making traditional emo music extremely in the process because of the incorrect label they were given.

Most of us have that artist(s) they just can’t turn off when a song of theirs is played. For me, one of these is My Chemical Romance. I specifically remember one time I was about to be pulling into work when the song “Cemetery Drive” came on, and I literally drove past my work around the block and ended up being late because I needed to hear it. Sometimes we all just need to hear that music that gives our mental health a break, and MCR does this for me. I am pretty positive that I am not the only one who feels this way about their music. To get yourself feeling some type of way by listening to MCR yourself, their Spotify is linked below!