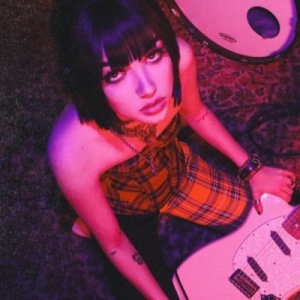 I’ve been following Maggie online for a couple years now, and it has been pretty rad to see her grow and find her identity as an artist. I don’t even know why I started following her, it was honestly probably because someone tweeted a photo of her and I thought she was hot, I’m not going to lie. I knew that she was popular online, and just assumed she was a typical Instagram star, and never knew she was making music until last year. I guess I didn’t pay attention to her tweets, I don’t know. Shortly after that, I heard the Cheat Codes x Cade remix of her smash “Pretty Girl,” which has over 500,000,000 listens in Spotify.(I am going to keep plugging Spotify like this until I get a big enough following and they sponsor me, just so y’all know). I actually saw Cheat Codes perform at Summerfest last year, and even though there was a huge thunderstorm that day during Cade’s opening set, it was really really fun, so check both those artists out. I really started getting into Maggie as a musician after I heard this song because I dig the lyrics and message of the track. At the beginning of last year, she dropped a song called “Obsessed,” which is a pop track with a super funky groove that I love about her being into a significant other who is way to into themselves and not giving her proper attention. Then last October, she released “Human.” which is a low key and pretty track about not feeling comfortable with who she is, and the voices in her mind make her not feel human. I love the lyrics to this one because I totally relate to this feeling. Like shit man I know everyone else doesn’t feel like they are bonkers and emotional and emotionless and… sorry this isn’t therapy my bad. The music video for this song is very Halloweeny and awesome, I recommend it. Her last two tracks, “Would I” and “Friends Go,” are both a step into a rock direction that she has stated is what she feels she really wants to do and what is true to her as an artist, and I really dig that direction for her. The way she dresses is definitely goth and rock, and her new music matches that for sure. In “Would I,” she talks about trying to get over someone without having to use drugs or alcohol or do not ideal stuff, which is a totally relatable feeling. This song features a really pretty falsetto in the refrain and really shows off her talent as a singer. “Friends Go” has more of a ska rock feeling to it reminiscent to No Doubt, and personally I hope she continues in that direction. The music video for “Friends Go” actually comes out tomorrow. Maggie has a clothing line as well called Swixxz, which is being sold at Zumies. It definitely is unique and you can tell by her own style she made it; it’s very punk. I’m excited to see anything she has to put out next because she’s very genuine and makes the people who feel like outsiders feel included. If you want to listen to her music, check out her Spotify below!